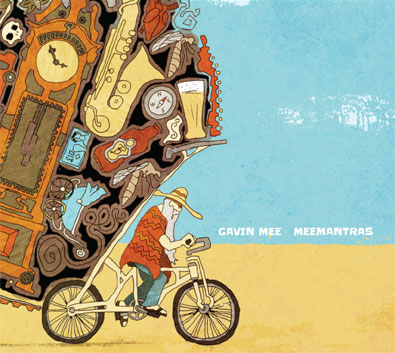 … documents time spent on the road when Gavin was touring his debut album Breech Birth (2006). Regaling his journeys to a dance festival in Portugal and where he came to eventually live for a year in Andanças. His ode to Amsterdam recounting a near fatal bike crash with an Amster dame in ‘Pennyfarthing’ and his home thoughts from abroad when he recalls a visit back to Ireland where he took a Dutch girlfriend to see a famous labyrinth in the north in ‘Peace Maze’.

These songs and many more with similar tales of nomadic inclination form the mantras that took Gavin back to his home town of Dublin in 2012 to collaborate with ‘powerpop’ man Duncan Maitland. Gavin’s love of 70‘s singer/songwriters like Harry Nilsson and Loudon Wainwright III fuze with Duncan’s pet Beatles, XTC sounds to father a modern day classic pop album.

Meemantras gets a 2014 summer release on Birthings Records.
Produced by Duncan Maitland (Picture House, Pugwash).
Mastered by Jon Astley (George Harrison, The Who, The Rolling Stones)